Airmakers Heating and Air Conditioning has been helping families and businesses to live in comfort for more than 15 years. No other air conditioning sales and service provider in the area compares with us when it comes to quality of service or affordability. Our prices are very competitive and we have experience in residential and commercial installations, replacement, and service.

At Airmakers Heating and Air Conditioning we offer some of the finest heating and air conditioning solutions in the business. Top-Quality, innovative products with the latest technology, lasting performance, high efficiency for low-cost heating and cooling. Great warranties and excellent service and support.

Please call us for all of your heating and air conditioning needs. We consider no job too big or too small!

Van and his wife Mayela are native San Diegans and have over 15 years experience in the heating and air business. Please call them for a free quote.

This is by far the best place to call if you need heating or ac work.We were having a problem with our home heater not working,so we called Airmakers and Van came out and checked out our heater and told my wife to start with the filter.Very honest man.If there are any issues they take care of it right away. Will definitely tell my friends, thanks for everything guys.

We rarely used our heating and air. Now that we've decided to (we're getting old and can't handle weather fluctuations anymore!), we realized one of our duct went nowhere because it was not properly closed off during a remodel. We got multiple quotes to fix it and Airmaker's was the last one to come. By then, I'd already figured out what was needed and price point.

Van is a no nonsense guy and gave us a fair quote. He didn't talk much and only said what he needed to. Not everyone likes that but I do! He sent Carlos to do the work for us and he was awesome.

We will be using them from now on for our servicing as well. We highly recommend them for the quality of work, honesty, price, and no nonsense!

We moved into our 1974 home with no AC a few years back. We initially got quotes for AC, but realized that replacing the windows was a higher priority. Fast forward to July 2018 of this year, my wife and I finally broke down and decided to look into cooling. We had a dozen companies out giving us quotes between 12-20K. Most wanted to move the unit? from the garage to attic, replace all of our ductwork, and rip out a 3 year old heater that was just installed. Simple fact, we couldn't afford it. I remembered Van coming out a few years back and providing a quote well under the others back in 2015. I asked him to come back again to provide an updated quote. I expressed my concerns about the pricing I've seen, and he told me about how most other companies will only work on the products they're contracted with. Van was willing to work with me and add cooling to what I had and also provide an amazing labor warranty on top of it. It says a lot that Van was able to be consistent about his pricing, stand behind his work, and commit to a longer labor warranty. When we were committed to move forward, he had his guys at my house on time, and were able to finish the work in the same day. We're happy with our decision to hire Airmakers.

We had a technician and he was awesome. This is the second time we've used this company and have only good things to say about them! Polite, friendly, and very knowledgeable. Their prices are very reasonable too!

Came back from out of town to a heat wave & no cool air...to make things worse my spring broke on my garage door. Luckily while the repairman was fixing it he noticed an Airmakers truck in my neighbors driveway. Van came over & it was a simple fix but he had to rush to the warehouse to get the part before they closed. Van had my air conditioner up & running in minutes. Great Company & I am all for supporting local family businesses over the big guys!

"Living in La Mesa, when it’s hot it’s really hot and when it’s cold it’s really cold. Well, as the summer is approaching I want to prepare for the heat so I called Airmakers based on a recommendation from a neighbor. I thought I needed a new central cooling system, but when Van came up to check my AC, he noticed that my fluids were not set properly so it was causing the air conditioner to cut off all the time.

That’s all it was – coolant.

Van could have charged me for a brand new installation, but did the right thing and only charged me for a service call, saving me thousands of dollars. I was so thrilled and blown away by his honesty. I will always recommend Airmakers Heating and Air to anyone who asks. These are the kinds of companies you want to give your business to—honest and hardworking.
"

For years I've had to call HVAC companies to repair my old furnace and it keeps breaking down. Finally last year I tried someone new so I called Airmakers and the guy came over and told me exactly what the problem was. The igniter or pilot was not working properly. This entire time it was never the furnace, but the pilot kept going out. Seems like a simple fix, yet I've had 2 other HVAC companies come to take a look and neither of them could figure it out. Honestly, it was such a small job that I don't think any of them wanted to deal with it so they just blew me off.

Not Airmakers. This guy spent the time to look over everything thoroughly. Even when he detected the problem, he went through and cleaned out the furnace and checked all the other parts to make sure they were working properly. This is the best air conditioning contractor I have ever used and as far as I'm concerned, the best one in San Diego County.

Very Happy with the Service

I live in San Diego and it usually doesn't get too hot where I live so I never use the air conditioning. But this time I couldn't open up the windows because of a fire over the hill was blowing smoke and ash all over. But the AC didn't work! I tried a couple of different companies and none of them could make it up for a few days. Gee, I guess everyone calls when it gets hot, go figure. Airmakers was the only one who could send someone, maybe because they already had a technician in the area, but it really seemed like the woman on the phone wanted to help my situation. She was really nice about my situation.

The tech came up on time and went to work. I don't know what he did, but like all the other reviews I read about Airmakers, he seemed really honest with all his work and wasn't trying to gauge me on price or sell me stuff I didn't need. It actually seemed like he was trying to give me the best possible solution without spending a whole lot of money. Love these guys and would call them back in a second if I ever have a problem again.

The heater at our new house wouldn't turn on so I called Airmakers because we had used them a couple times at our previous home. Van has always done great work and been conservative in his diagnosis of what needs to be repaired/replaced. He's reliable, shows up on time and gets right to work. He's always given us a good price as well. This time he came and was up in the attic where our furnace is for awhile working on it. When he came down it had started working again and he said he had just had to adjust some things and tighten the connection of a part that had been jostled loose. He said there was no charge. I appreciate his honesty and willingness to spend the time to get it working even without charging us. We would recommend Airmakers and will definitely call them with any issues in the future.

As a Raleigh area Realtor, finding good and reliable vendors is paramount to providing excellent service to my clients. Boy did I hit the jackpot when I partnered with Airmakers for all of our clients' HVAC needs!! They are fast, reliable, courteous and reasonably priced. Not only do I use them for clients but also for my personal home. I wouldn't recommend anyone else! Thank you, Airmakers, for making me look like a ROCKSTAR!

Our air-conditioning began to work sporadically and over the course of a few days, finally completely stopped working. The problem was with a clogged drain that I was unable to correct during a recent hot spell. The technician solved the problem which I expected he would. I do not usually post reviews, however, in this case, I made an exception. I was extremely impressed with the quality of workmanship with this repair. I inspected the area of the repair and noted the quality of how everything was corrected. I would highly recommend Airmakers and it is my hope that this specific technician learns of our satisfaction!

Call the others, THEN CALL AIRMAKERS!!! Selling my home, and the inspector brought out Micheal and Sons. They estimated $792 to clean out a drain line, clean the coils and change a bad capacitor. They also said there was crushed ducts in the attic . I thought that seemed high because my home is only 5 years old, so I called the people who originally installed the system- AirMakers. A wonderful service tech named Anthony R. came out and analyzed the system. He was very professional and polite, and even called Michael and Sons to get that techs input into what he was doing to make sure he didn't miss anything. (needless to say- there were no crushed ducts in my almost new home)

All in all, I ended up paying AirMakers $418 for what M&S wanted $792 to fix. Guess all those radio jingles cost a lot of money, and they pass that right along to their customers. I will call AirMakers every time from now on. 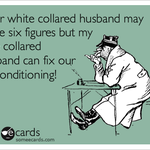 Can you Count the number of #AirConditioners in this Chinese building? In 24 Hours we will revel the answer. http://t.co/6vnlgOpnAu
Twitter   Full Post ›